Electro got a significant hype-boost lately. It also seems that the attention of the media is being drawn to a genre, which has mostly stayed out of sight in recent years. How do you explain this to yourself?

I guess this is a normal cycle with music. The media now sets the spotlight on a genre which has been there for decades. But it feels new for a lot of people out there. At the moment there are some special artists like Helena Hauff or Stingray and they are really on fire. They play a lot in clubs around the world, giving a fresh impulse to the electro scene. People trust them and so they open their mind for new things; it becomes normal to not only play techno in a club. DJs buy more electro on vinyl and this is perfect for our scene. People are hungry for new things.

Are you happy with the increased attention? Do you think it could also have a negative effect (overhype) in the long term or is it true that "real Electro will never be in or out of fashion”?

Yes, I’m happy with that development. To overhype a genre isn’t possible in my opinion. You can overhype artists, that's possible. The Media is always looking for things that are interesting for people and maybe this year everyone wants to dance to Trance records. Then Trance will get hyped. It’s a fast world with a vast amount of information around us and nobody knows why hypes are created. It happens in some way. But the electro scene itself will always have that community and it will be bigger sometimes and sometimes smaller. But it will never die, thats for sure.

“Das Heise Experiment”, a fully-fledged concept - involving music, but also visual and tactile potentials that go with vinyl, not to mention the comic - has set a particular milestone for you and your label Solar One Music. You haven't had the opportunity to talk more about the significance of this project. What brought you to the idea?

Nico and I are both big comic fans since back in the day. We also wanted to do something different - a whole project that combines the visual and sonic component. The listener can empathize with the story of Dr. Heise (Heise is my birth name) a scientist who works on an experiment with an alien life-form. It’s a concept album in which both components are directly combined and work together perfectly. Even in days where people are busy most of the time, we thought why not create something you have to take your time with. You must get involved with the story, indulge in your own fantasy, listen to the music and dive into another world. That is the big goal of this release. I didn’t just want to do a forward-thinking electro album for this project, I wanted to go a little bit deeper into my world.

Once again Gerald Donald aka Rudolf Klorzeiger is featured as a prestigious collaborator. How much of the whole concept is a personal interpretation of what Gerald Donald has explored in his multifaceted career especially under the Dopplereffekt and Arpanet aliases?

I really like to work with him.It’s always a big inspiration and no doubt his projects inspire a whole scene (including me) and even a whole generation, but for the Heise stuff we didn't think about something that has already been there. The story grew in our heads in our heads for years. Since the start of my career it has always been extremely important for me, to have a story in my mind when before I make music. It's true that Drexciya was a big influence and totally my thing. Their concept and stories and the music itself, but even if they hadn't done it like that, I would still do it exactly the way I'm doing it today. I was always a science fiction fan, even as a kid, I always wanted to do music and the goal was to combine it with a story and a visual component. I’m very proud of this project, because everything comes together in a way and that has been my vision for many years.

Has the visual presentation of your productions and performances always represented an important part of your work ethic? If not before, has that changed now?

Always! I like stories and imaginery worlds when it comes to art and music. Art is an escape from the "normal" world with its rules and so on. Wearing a mask gives me the freedom to dive completely into the Exaltics world. It’s a little bit weird but it’s for me the only authentic way to represent my music. I don’t want to be that normal guy who drills his instruments, I like that weird feeling when you look into a dark mask and listen to dark and eerie music. That’s totally my thing.

In an interview with Soundwall.it last year, you said that a defining, compelling element in your music is the melody. Do you think that the melody is the key element that brings people’s attention towards your sound?

I don’t know, for me melody is essential. It gives a track its character, its face. I love playing pads to add an eerie or even a nice feeling to a production. It makes music even deeper.

The label is still managed by you and Nico, do you also collaborate in the music production process?

I do the label with Nico, but we don’t find time to make music lately. The label work, our regular jobs, everything became just too much for us. We worked together as Crotaphytus some years ago. It was always a tough process because Nico has his vision whereas I have mine - but it's fun. Hopefully we will find the time to sit in the studio in the future again.

Last June we had the pleasure to have you for a live performance at our party. Your equipment looked very compact. What kind of gear have you been using and did your live setup change over the years?

Really enjoyed my stay in Vienna. It was a cool party with a great crowd. Yes, I use Ableton Push, this is really compact and i have a lot of possibilities. I try to combine some kind of live elements while also working with the DJ mixer to have the possibility to put tracks on top of each other, for cutting, etc. Like a DJ. This puts a lot of energy into the performance and I really like it this way.

How do you prepare for a live performance and is there a The Exaltics DJ set?

I have a long prepared live set with loops, even old tracks, effects, sounds, pads and so on. I've spent a lot of time to get it done. Every set grows differently, because of the energy of the crowd or even because of my mood. I really like the possibilities with Ableton. My good friend Emika also gave me a lot of impulses to finally go out to play live and get a set done. Back in the days, I was on the road as DJ. Today I still think about it, but it’s not definitely decided yet. Let’s see...

There are several artists who are wearing masks during their gigs. You once said that you chose to hide your face to make your project more special. Do you consider the mystery over an artist’s identity as something essential, e.g. for people to delve into the music without being distracted by other, secondary things, which actually are often more emphasized than the music itself?

I love masks and I really like imagination. Music is a show and I like the idea of a mysterious person playing weird mysterious and eerie music. For me the concept works together perfectly and when I put on the mask I become part of my Exaltics world. This is a creative process and essential for me. 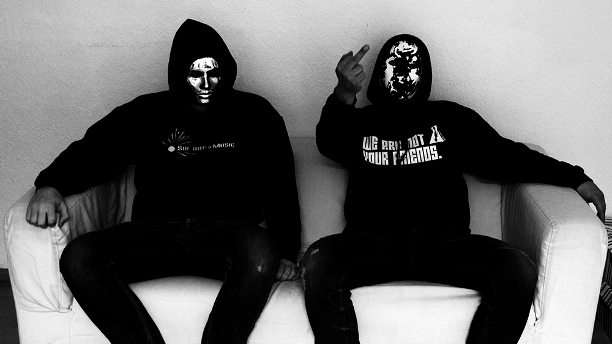 You are recently being presented as one of the main characters for that genre. Do you feel comfortable with that?

To be honest, I haven’t had a strong opinion on this. We work hard with the label and with the music. It’s a passion and we are happy that people like it. We do our thing, here in Jena, more or less off the grid and have no sense of how far things have developed. We are not in Berlin where you always are in keen exchange with other artists. But we like our silent way of life in the "province”, far away from big cities. That’s our inspiration.

Ultradyne, our next guests in February at Grelle Forelle, also choose to wear masks. Have you heard them playing live? Do you have a favourite Ultradyne track or one you would like to recommend?

I Haven’t heard them yet but hopefully will in the future. I really like their music, their radical and experimental approach. Their remix of a track of mine some years ago was THE bomb!

Most Solar One T-shirts and sweaters from your merchandise rock the motto, “We Are Not Your Friends”. Where did that originate?

My first record on Last Know Trajectory had this title. This sentence is from the title track (i.e. Let The Invasion Begin), where The Exaltics speak to the humans on earth. It’s a little bit to be seen as social criticism. There is so much shit happening in this wolrd and this is our answer, you know.. ;)

What are The Exaltics and Solar One Music up to in 2018?

We are pushing our new Electro-only sublabel Between Places and we’re also working on the first record for our more Techno oriented sub-label Rattleznake. There is a lot to do..

Do you have any hints or advice you could give to someone who is new to Electro?

Stay on your path, fight hard and never give up! It sounds like an old phrase but it’s the truth.

Thanks for your time and we hope to see you again soon.